You have to do the bank reconciliation monthly each bank account wise. 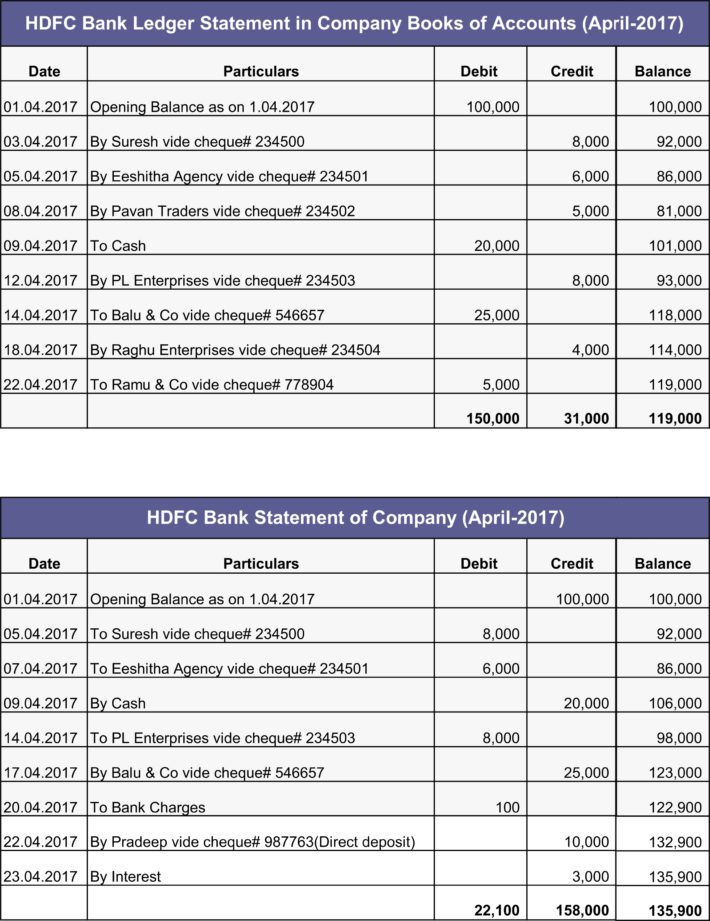 The first screen shot indicates bank ledger balance as per the company books of records for the period of April 2017.

The above second screen shot indicates pass book balance as per the bank statement for the period of April 2017.

First you have to download the bank statement for the reconcile period.

You have to verify as per the company books of accounts all issued cheques have been cleared by the bank during the reconcile period (April 2017).

You have to verify as per the company books of accounts all deposited cheque payments have been collected by the bank during the reconcile period (April 2017).

Example, received a cheque from the customer on 28th April 2017, the same has been deposited in bank. However, it may take a few days to clear in the bank account. Hence the balance as per bank ledger in Tally will not match with balance as per bank statement, because, you have recorded cheque deposited entry on 28th April 2017 in Tally but the cheque got cleared on 1st May 2017.

How to enable banking features in Tally

Set/alter transaction features: Yes, once enable this option, and then you will find Banking option in Gateway of Tally screen. 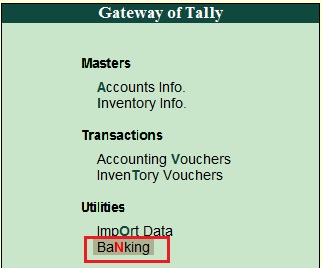 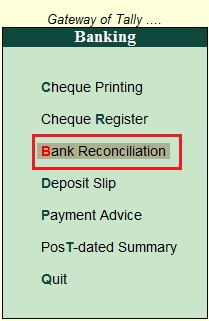 Select the bank ledger from the list of bank ledgers for which bank account you want to do the bank reconciliation.

You have to enter bank clearing date in bank date field as per the bank statement as shown in the above screen.

Example: As per the first screen shot of the company bank ledger account, the cheque has been issued to suresh of Rs.6000 vide cheque# 234500 dated on 03.04.2017, the same has been cleared on 05.04.2017 as per the pass-book (Bank Statement), the same clearing date you should enter in the bank date field while doing the bank reconciliation.

Like the same you have to enter the bank clearing date for all issued and deposited cheques as per the passbook.

The following transactions are recorded in pass book, but not recorded in the bank ledger account in company books of accounts (Tally) and those transactions you have to record in Tally.ERP9 like as shown in the below.

As per the pass-book bank charges deducted by the bank on 20.04.2017, record the entry in Tally on same date as shown below.

As per the pass-book customer (Pradeep) has directly deposited by the cheque on 22.04.2017, record the entry in Tally on the same date as shown below.

As per the pass-book interest credited by the bank on 23.04.2017, record the entry in Tally on same date as shown below.

You should enter the bank clearing date as per the bank statement for the above recorded transactions as well (Bank charges, Pradeep & Interest).

Now, you have entered the bank clearing date in bank date filed for all the above transactions of the reconcile period.

Issued cheques to Pavan Traders and Raghu Enterprises but not yet presented for payment during the April 2017.

Received cheque from Ramu & Co and the same has been deposited in bank on 28.04.2017 but payment not collected by the bank during the April 2017.

How to see reconciled transactions and narrations in Tally ERP9

How to Activate GST in Tally ERP9