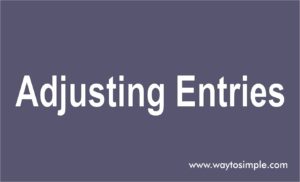 In real time accounting environment, companies will pay salaries, rent, telephone and other expenses as per the due dates and the current month related expenses will pay in next month example, rent for the month of April 2016, of $1000 paid in May 2016, but as per the accrual base system of accounting, the expenses incurred for the particular month should record in that month only by posting adjusting entries.

There are different types of adjustment entries are there.

Office rent for the month of April 2016 is $1000, but paid in next month May 2016, you have to record rent expenses in the actual incurred period i.e. April 2016 by posting adjustment entry, however, in the April month Profit and loss account statement need to include rent expenses but not in the May month.

Telephone charges incurred for the month of April 2016, but due date is 10th of the following month, as per the accrual base system of accounting you have to record entry on end of April 2016 and you need include telephone expenses in April 2016 profit and loss account statement, but not in May month.

Accumulated depreciation is also referred to as a contra asset account with a credit balance, it appears on the company’s balance sheet as a reduction value from the gross amount of fixed assets.

Which is credited when depreciation account is debited. You have to record the depreciation entry as shown below.

Salaries for the month of April 2016 paid on 1st May 2016, as per the accrual base system of accounting you have to record salary expense in the actual incurred period i.e. April 2016.